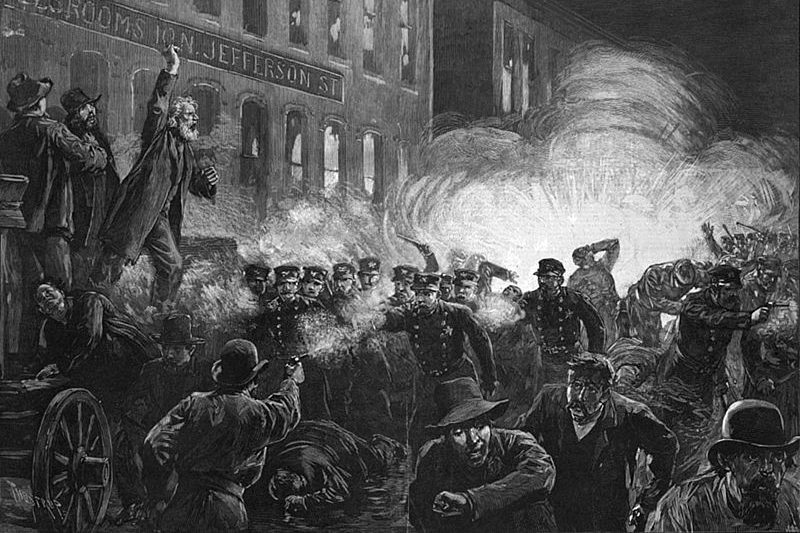 With International May Day approaching, we thought about the origins of this international day for the rights of workers and realized that it is important to shed some light on the history and social context of it. A special focus will be laid on May Day’s perception in the United States- the country where it was born but is not recognized today.

Chomsky, an American linguist and activist once said: “People seem to know about May Day everywhere except where it began, here in the United States of America”. Even though it is celebrated internationally, the association of May Day with communist regimes dominates the American discourse. Chomsky further explains that the majority of Americans are not aware that it was on May Day on which the 12-hour work day was finally replaced by what we have today: the 8-hour work day. But now let us have a closer look at its historical origins.

In the late nineteenth century, the working class started to organize in unions and other political organizations in order to fight against precarious working conditions. Back then, it was not uncommon for Americans to work up to 16 hours a day to ensure a living. During this period of time, socialist ideas gained popularity, also in the United States. In Chicago, the Chicagoer Arbeiter Zeitung was read widely by the working class. Karl Marx published his major critique of capitalism in 1859 with the title “A contribution to the critique of Political Economy”. His ideas circulated quickly around the globe. In the United States, the working class realized that the capitalist mode of production benefited their bosses while the workers themselves struggled to survive in spite of their hard work. During this peak time of the Industrial Revolution, men, women and children were dying at their workplaces due to a lack of health and safety measures as well as long working hours. Furthermore, the rates of life expectancy in major industrial nations was as low as the early twenties.

In 1884, the Federation of Organized Trade and Labour Unions (FOTLU) declared at the national convention that “eight hours shall constitute a legal day’s labor from and after May 1, 1886”. A year later, strikes and demonstrations accompanied this proclamation, mobilizing large sections of the workforce to prepare themselves for a mass strike. On May 1, 1886 more than 300,000 workers participated in the strike, 40,000 of them in Chicago alone. More workers walked off their jobs on the day after while the protest still remained peaceful.

On May 3, 1886, violence broke out between the police and the protestors in the McCormick Reaper Works in Chicago. As a result, four strikers were killed and an unknown number of them injured. A protest against the violence took place on the next day and August Spies held a speech about the ongoing strikes. While he was speaking, an unknown person threw a bomb into the crowd which killed seven police officers and eight civilians. A wave of repression followed the Haymarket Riots in which major organizers of the strike were convicted and four of them were even sentenced to the death penalty. These harsh penalties did not remain unnoticed in the international community, especially because no evidence was found of a connection between the organizers and the bombing. In 1890, years after the Haymarket affair, labor parties and organizations in Europe called for demonstrations in solidarity with the strikers who died or were convicted. At the Second International, communists and socialists decided to declare May Day as the international worker’s day in order to emphasize its ties to the Haymarket affair in Chicago.

Nowadays, May Day is celebrated as an official holiday in 66 countries and inofficially recognized in many more in order to remember the worker’s fight for equality. In the United States, however, President Grover Cleveland intentionally declared the first Monday of September as the official Labour Day in the United States to obscure its historical ties with the working class struggle. Moreover, in 1958, Eisenhower tried to revise the history behind May 1 by calling it “Law Day”. Thinking about the official declaration of May Day by socialists and communists, it becomes clear why the United States denies its validity even today. The anti-socialist sentiment in the United States is a relic of the Cold War that still prevails today. However, it is important to remember that May Day is celebrated in many countries, not only in regimes which sympathize with communism or socialism. Above all, it is a symbolic day to commemorate the struggles of the working class in gaining better working conditions and the 8-hour working day that we are used to have today. It is important to remember that the shortened working hours and better working conditions were due to the engagement of people and not as a result of supposed benevolent government policies.