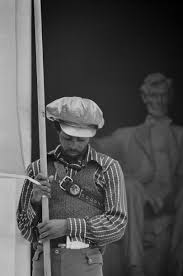 If you want to learn more about the Black Panthers, which you should absolutely do as this organization and its successors have massively influenced the discourse on racism and discrimination against Blacks in the US, this is a wonderful opportunity for you!

The Black Panthers, also known as the Black Panther Party, was a political organization founded in 1966 by Huey Newton and Bobby Seale to challenge police brutality against the African American community. They founded the Black Panthers in the wake of the assassination of black nationalist Malcolm X and after police in San Francisco shot and killed an unarmed black teen named Matthew Johnson. At its peak in 1968, the Black Panther Party had roughly 5.000 members. We will read excerpts from Ex-Members, view documentaries and study their 10 Point Plan & philosophy. We will take a look at the groups that have arisen since the Black Panther Party and their influence on the black community and the US racial policies. We will also discuss racism in Germany.